Only with passports could we have gone further

Heading north from Cape Town into the hinterland on my adventure motorbike for some reason always feels more of an escape from city life than when I’m heading east. East from Cape Town takes one into the delightfully scenic countryside of the Overberg, the Klein Karoo and the Garden Route. However, this is undemanding splendour and magnificence in overdose. It comes easy, almost in your face.
Journeying north is different. It’s like sampling an unknown, yet good wine. One has to explore, discover and savour the flavours and the palate. The beauty of going north lies in discovering the unexpected magnificence of this wide and often harsh, yet striking landscape.

On the first day of our three day tour, while travelling under a blanket of clouds and in cool weather, the landscape north of Clanwilliam had a special mood to it. The recent winter rains did the countryside good. The veld appeared lush and green. A cotton wool softness covered the surroundings. The cloudy sky made the horizon appear closer than usual.

Mesmerized by what Mother Nature offered, our group of riders headed further north. Our destination for the day was Onseepkans, a small border crossing village where we needed to have passports if we wanted to go further north into Namibia. But Namibia wasn’t where we wanted to be. We were to explore a chunk of the Northern Cape.

Nature hugged us with its soft, cuddly feeling and slowly the control that computers, traffic and business life had on us, was replaced by a feeling of bliss as we became part of the harmony in the environment.

Until the turnoff just after Bitterfontein. The velvety nature that we've experienced until now, was only the clinic where we cleared our minds from our daily stress. The 260 km stretch ahead through the Knersvlakte to Pofadder was to become the intensive care unit that would get rid of any left-over pressure that could still lurk somewhere deep inside our heads. 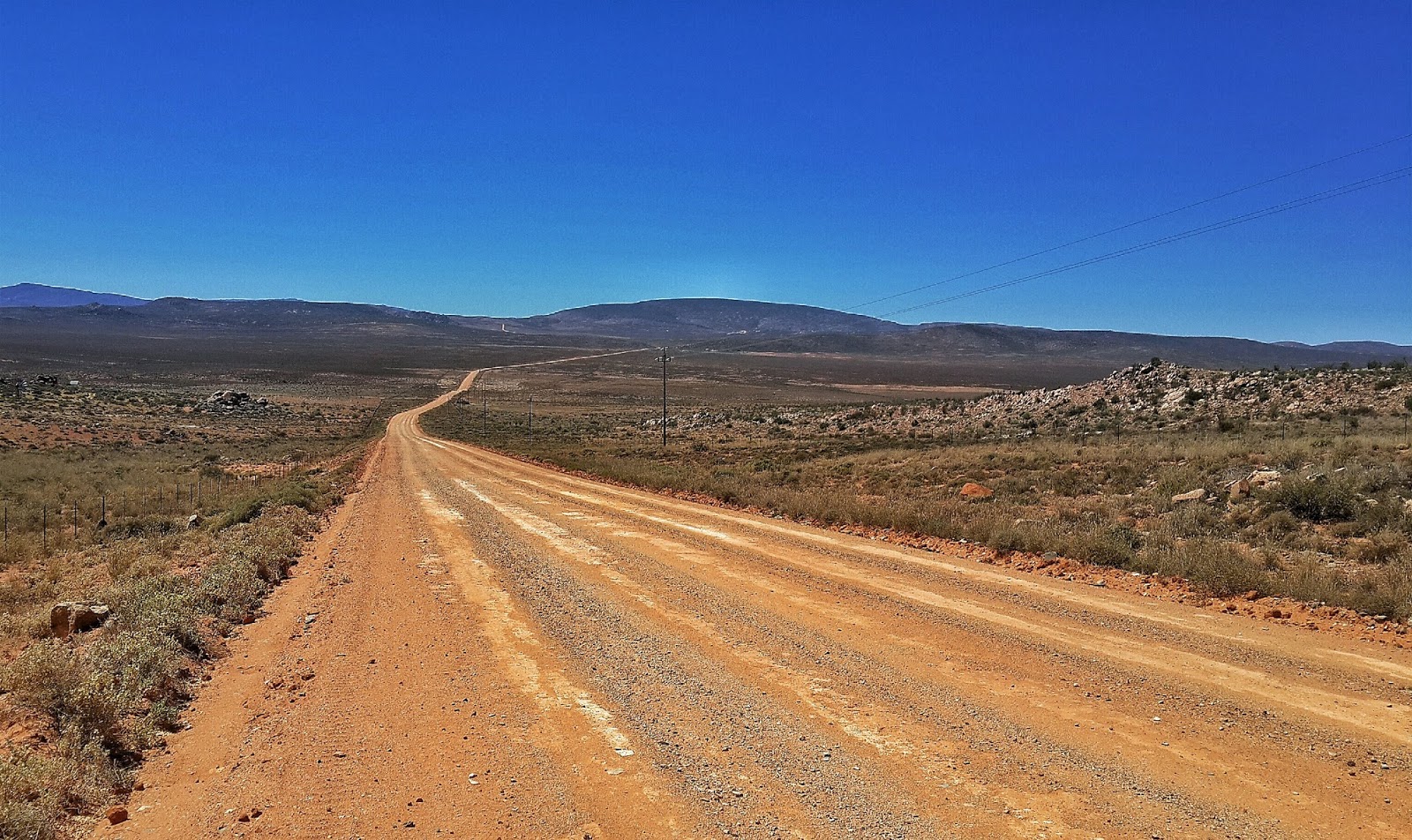 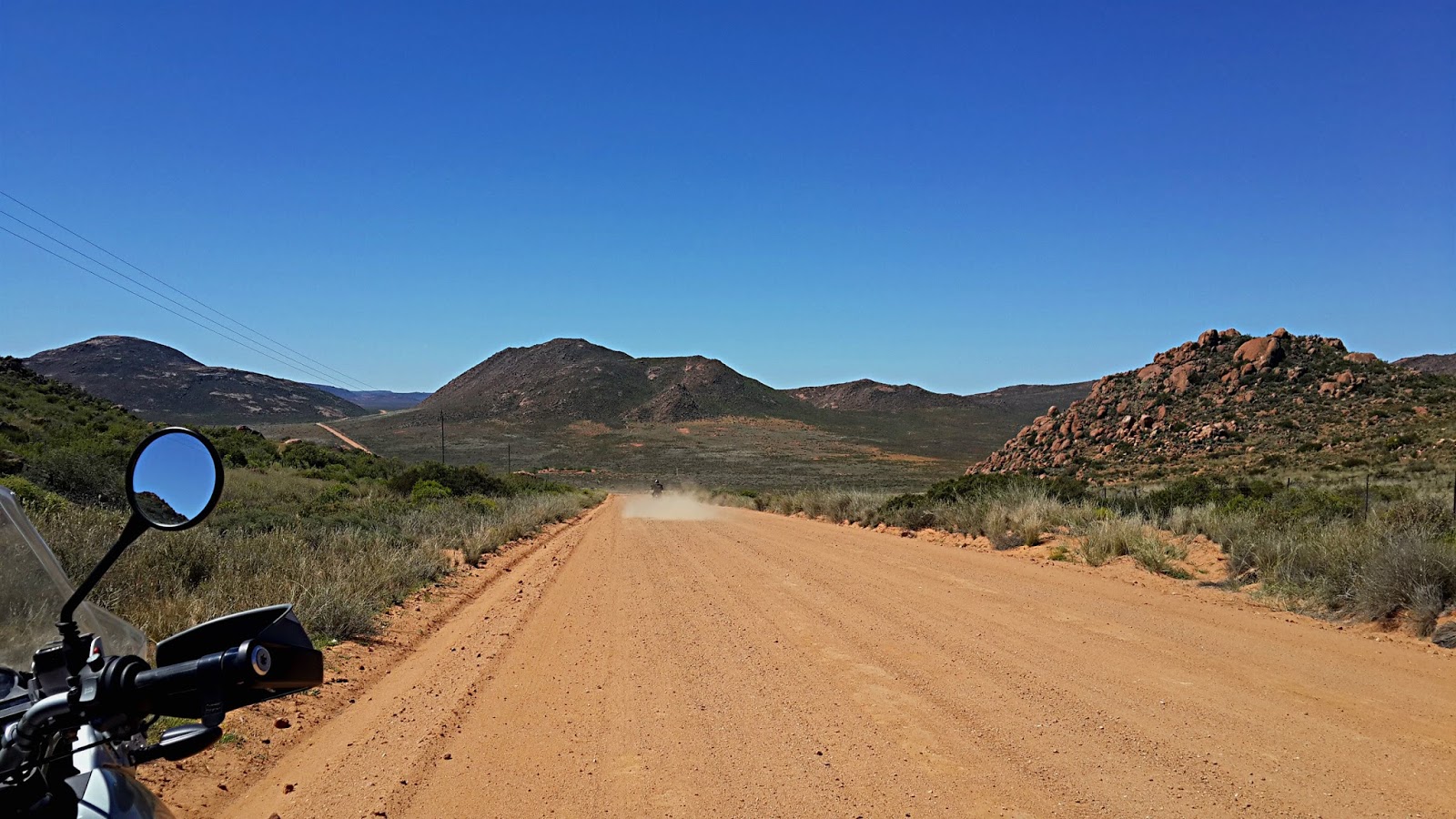 The rather rough gravel road to Pofadder wasn't the problem, neither the harsh Knersvlakte that we now started to traverse. It was the straightness of the 260 km of road in this desolate part of the world with nothing in-between – not even a bend – that started to unnerve some of us. The never-ending road stretching from one barren horizon to the next forced our minds into shutdown mode. Time and again we had to take our eyes off the road to refocus on the bikes’ instruments to break the hypnotizing effect of the endless path ahead. We could not afford to lose focus on this rather demanding gravel road. The Knersvlakte remained true to what its name stands for. We were certainly grinding our teeth while traversing this vast plain. 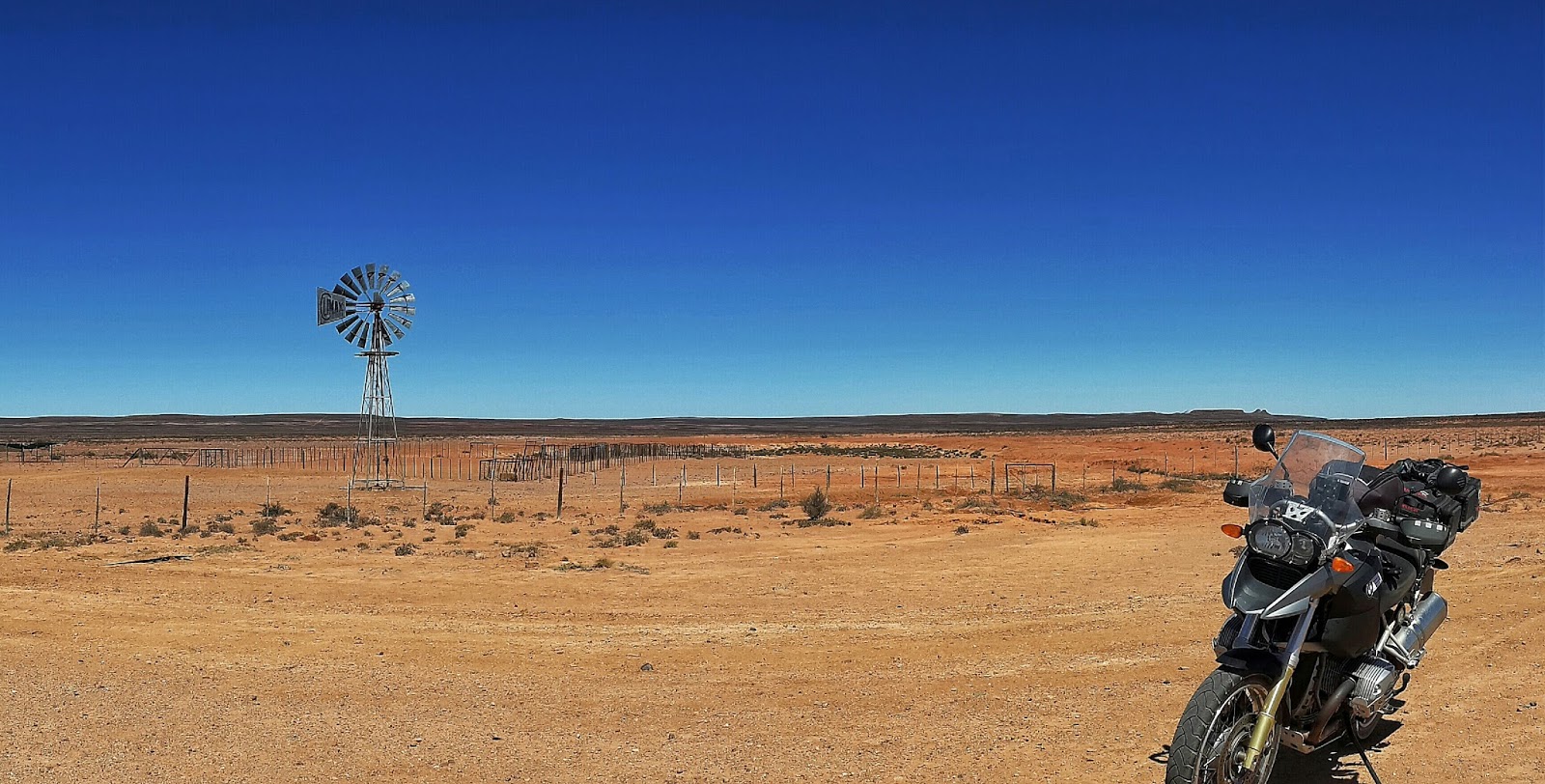 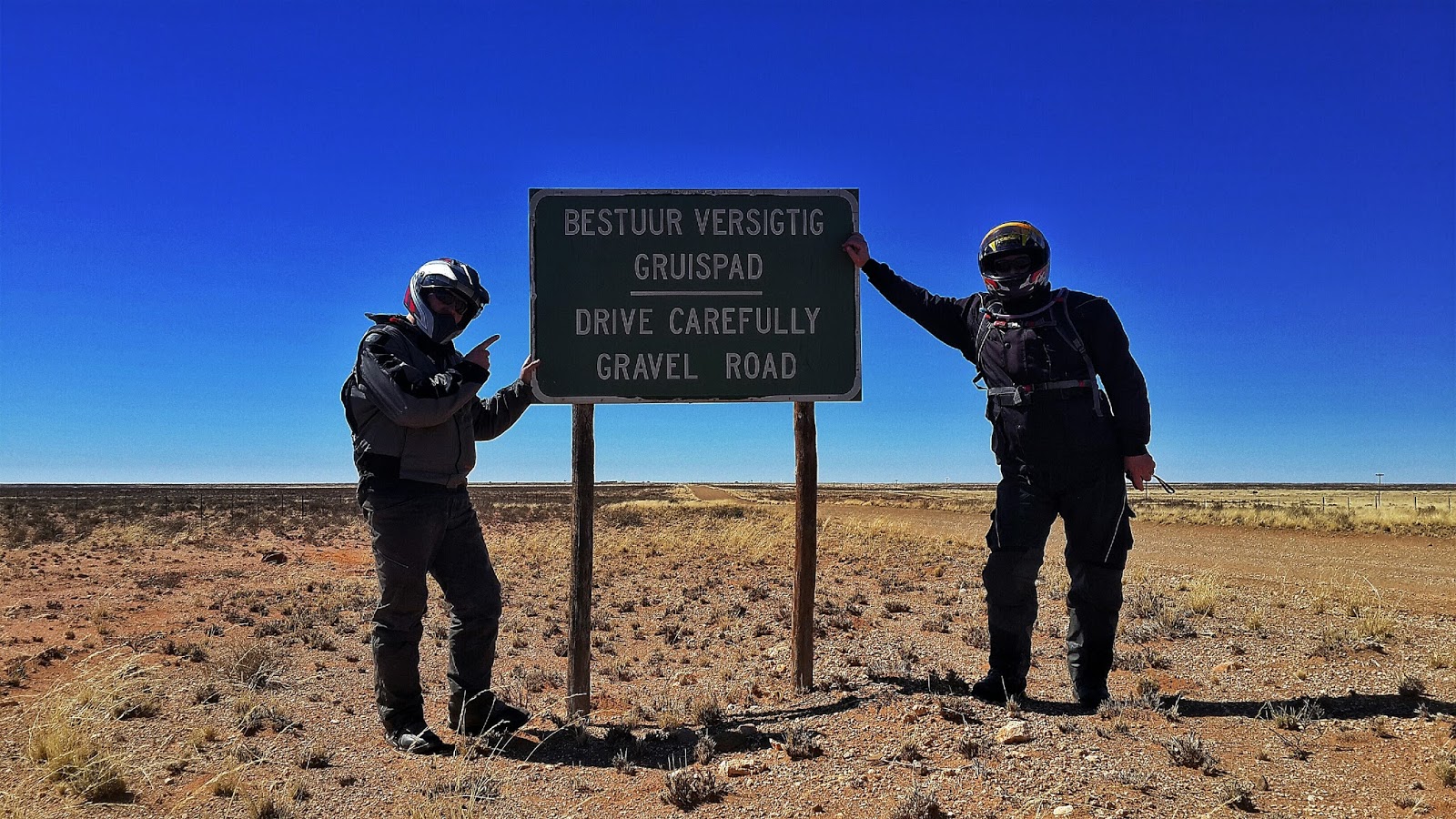 Entering the town of Pofadder on a tarred main street three hours later, was like landing on the cotton wool softness that we could still recall from earlier that morning. The 260 km intensive care treatment that we had just gone through really unclogged our minds. Luckily it did not affect our short-term memories!

We took a 90 km detour to visit Pella, a missionary station with a curiously Arabian atmosphere north-west of Pofadder. It was late afternoon on a public holiday and the area around the historic and beautiful 19th century cathedral was quiet. While we were taking a quiet break, a nun appeared from one of the houses. “Are you OK?” she asked. It could have been her presence, her concern, her clear and energetic voice or a combination of all of this, but a feeling of peace and humble respect for the place that we were visiting suddenly came over us. A strange kind of energy replaced the Knersvlakte tiredness that was within. 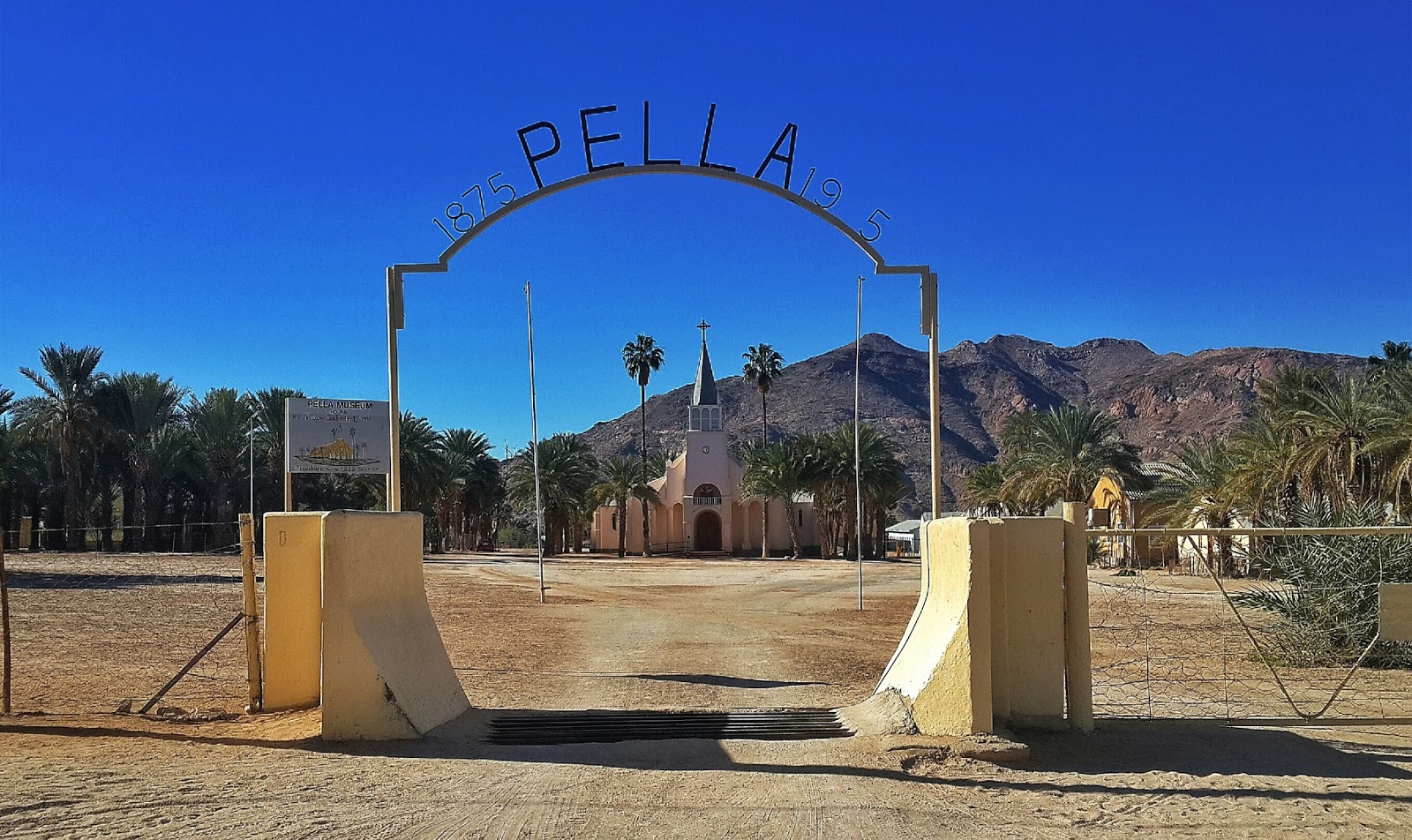 We approached our final destination for the day, the low-lying area of Onseepkans on the banks of the Orange River, like an aircraft doing a final approach to a runway. Lower and lower the road took us into a wonderful vista until we stopped at our accommodation for the night.
In the west the sun was starting to set. 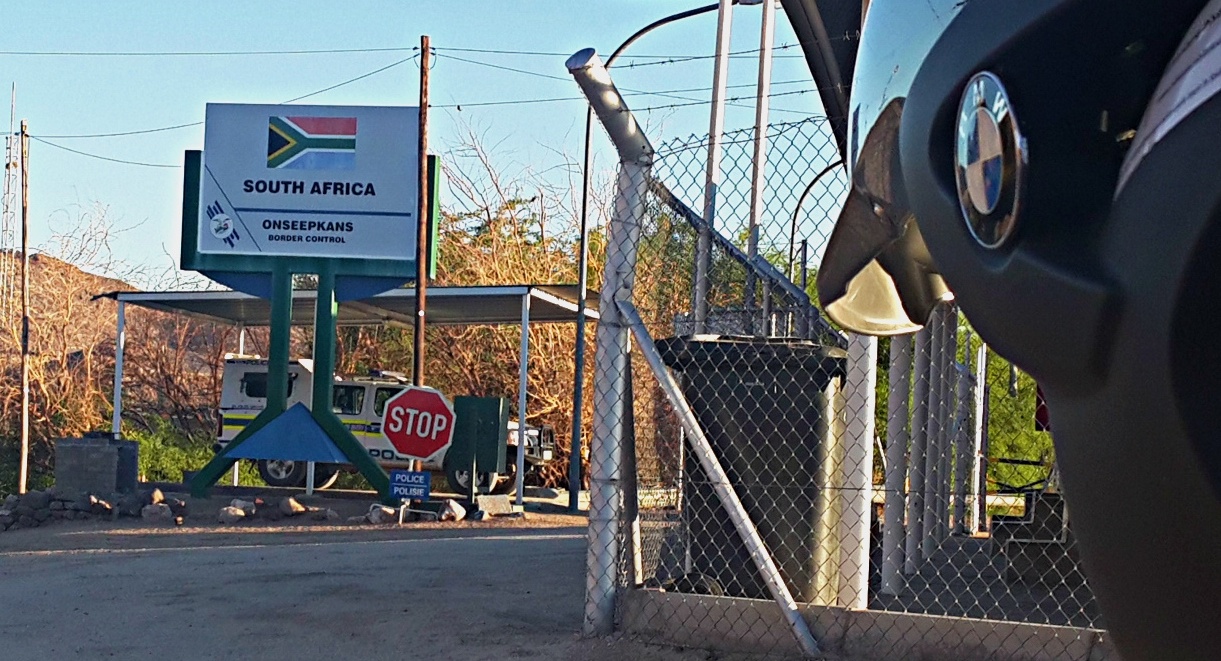 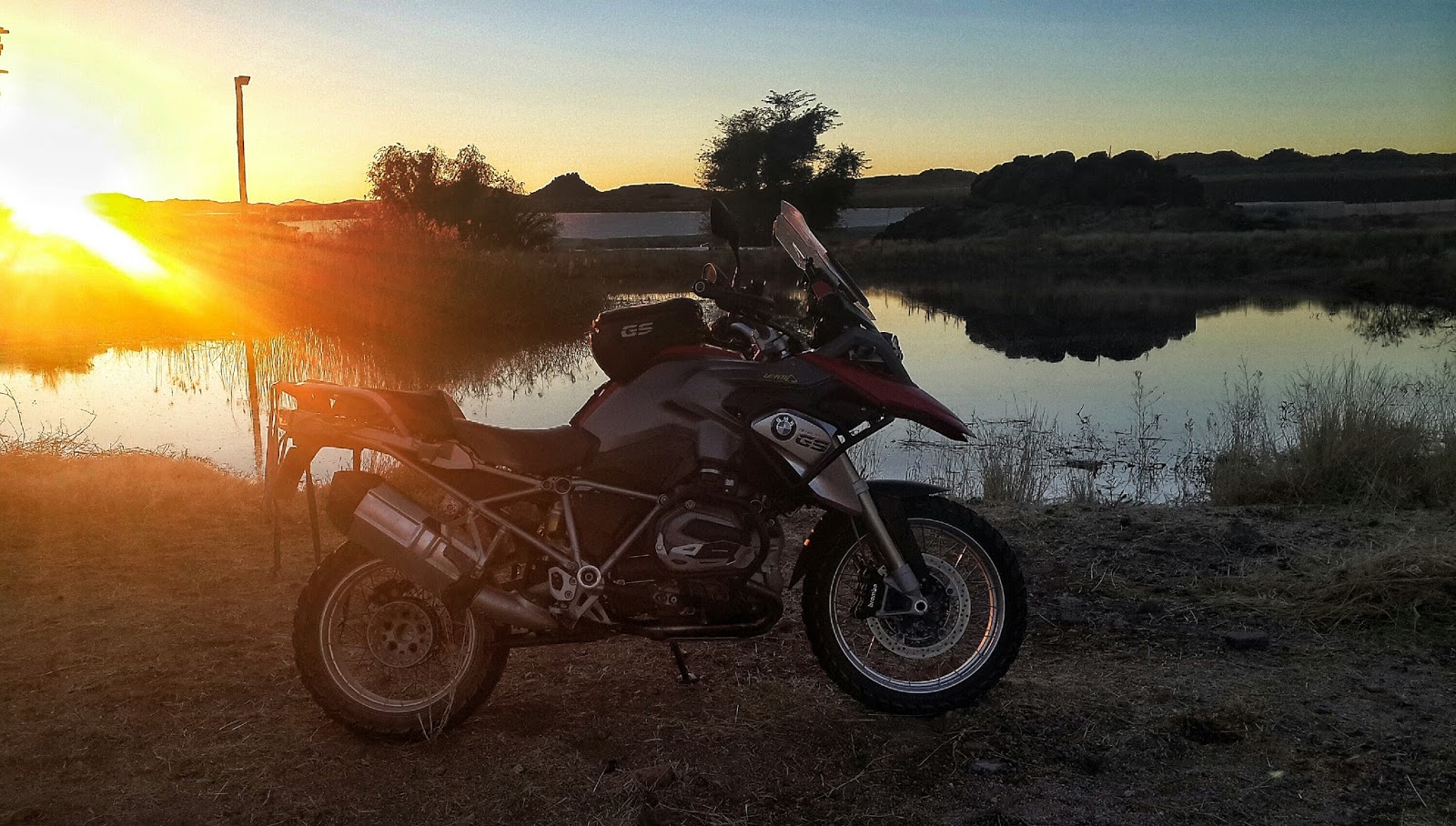 The next day an early morning start ensured that we saw nature at its best as we negotiated the rather loose surface of the recently graded gravel road to Kakamas. The rising sun created an unreal orange glow on the low mountains to our left. To the right, long shadows stretched across the veld as if to protect it for as long as possible before the harsh rays of the sunlight would step in for the rest of the day. 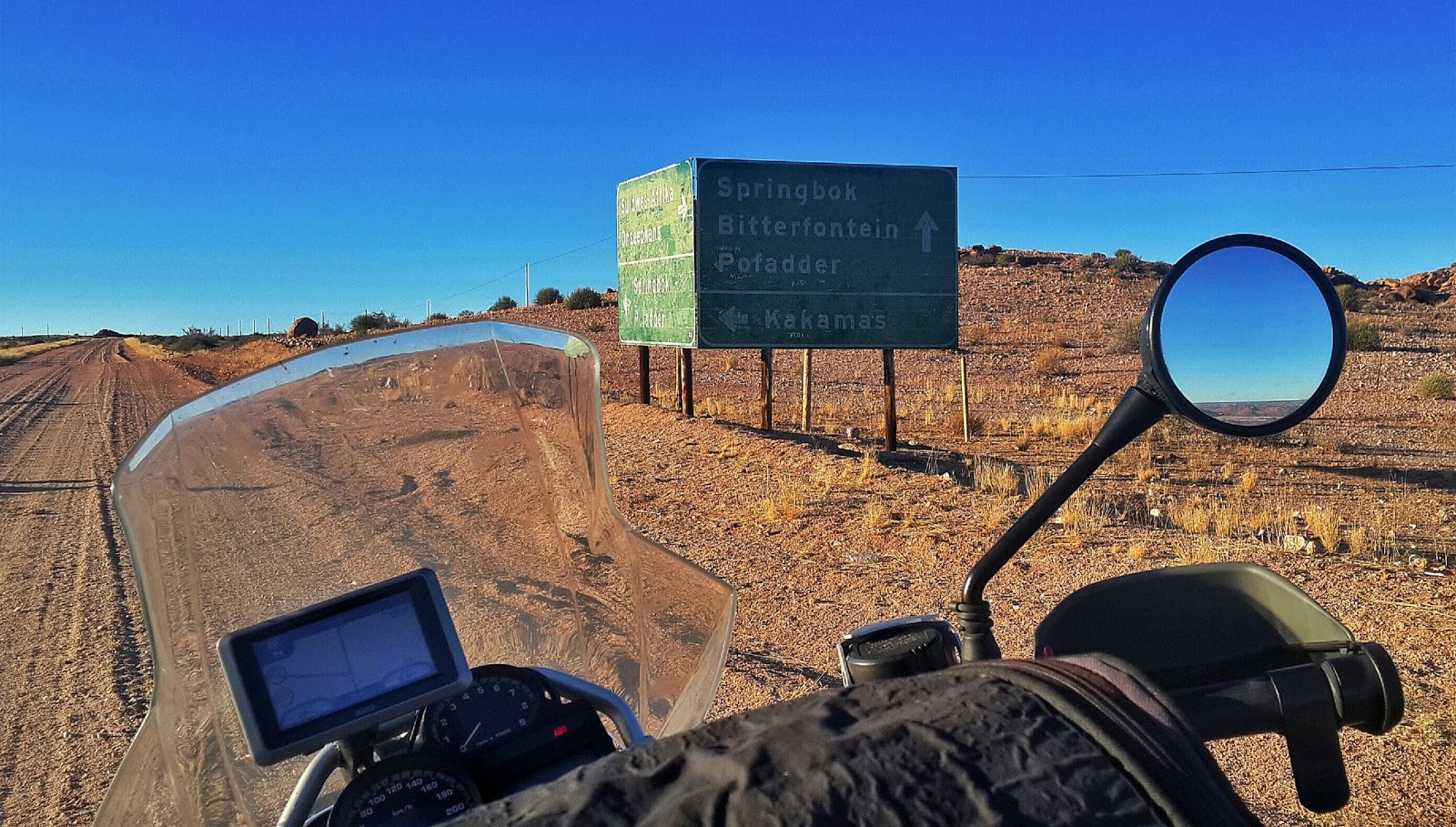 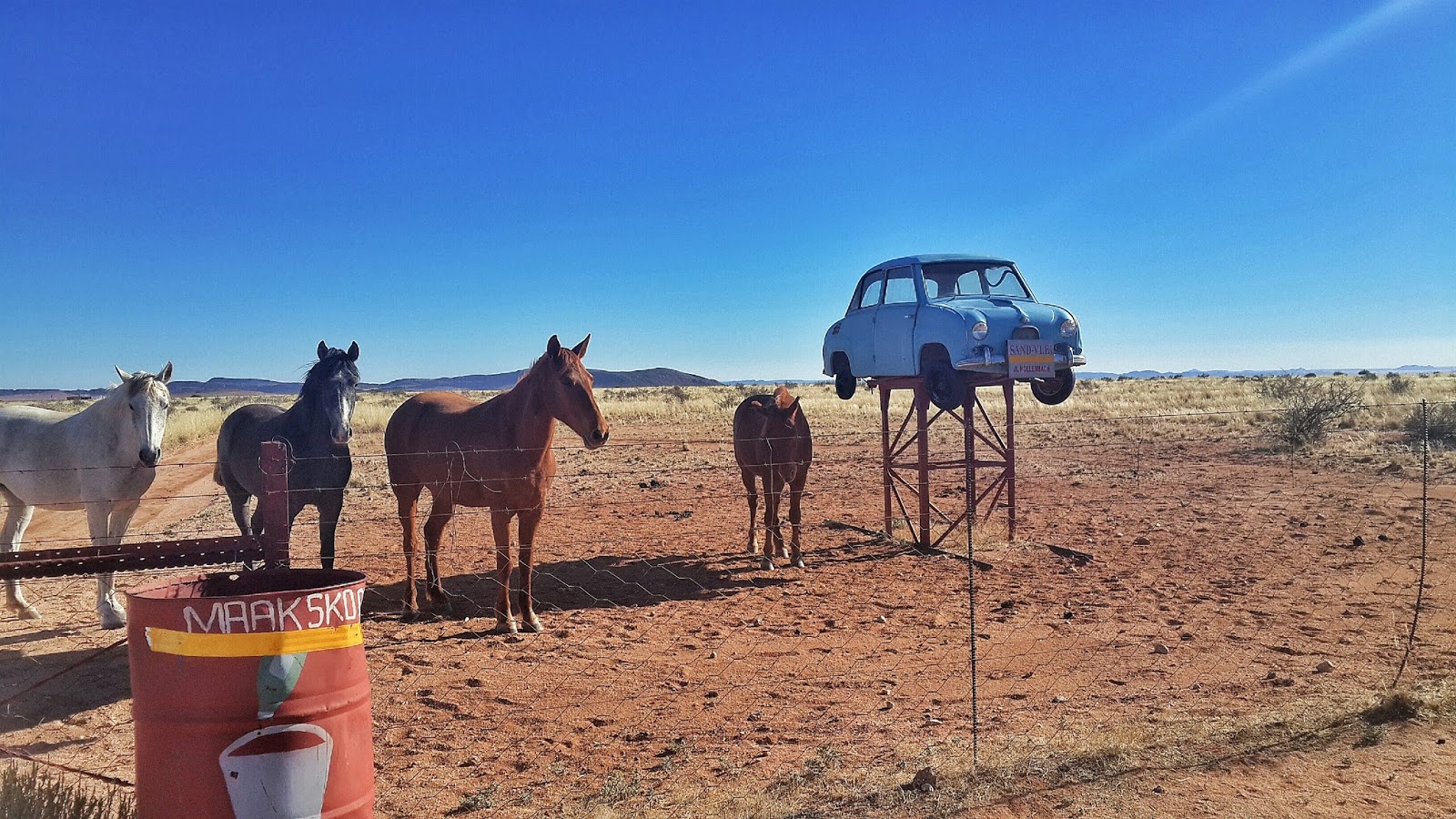 Joining the N14 about 60 km further on was a relief. The quiet tar road allowed us to switch to auto-pilot and we could sit back and enjoy the crisp, fresh morning air flowing over us. And for a fleeting moment my mind wandered off to what must have been congested roads somewhere down south where people were on their way to work at that time of the morning.

“Intriguing or spectacular?” These were the words that I was playing around with in my mind while watching the remarkable rock formations and the powerful flow of the Orange River at the Augrabies Falls. In the end it was intriguing that won. There was more to the falls than only being spectacular. There was a certain magic to it.

“How was it possible for water to sculpture hard rock into such fascinating shapes?,” I asked myself while staring at the solid rock formations, the deep ravine and the large volume of water rushing into it. It was as if the tableau in front of me presented only the facade of something more, something deeper and something mysterious behind it. Intriguing, indeed! 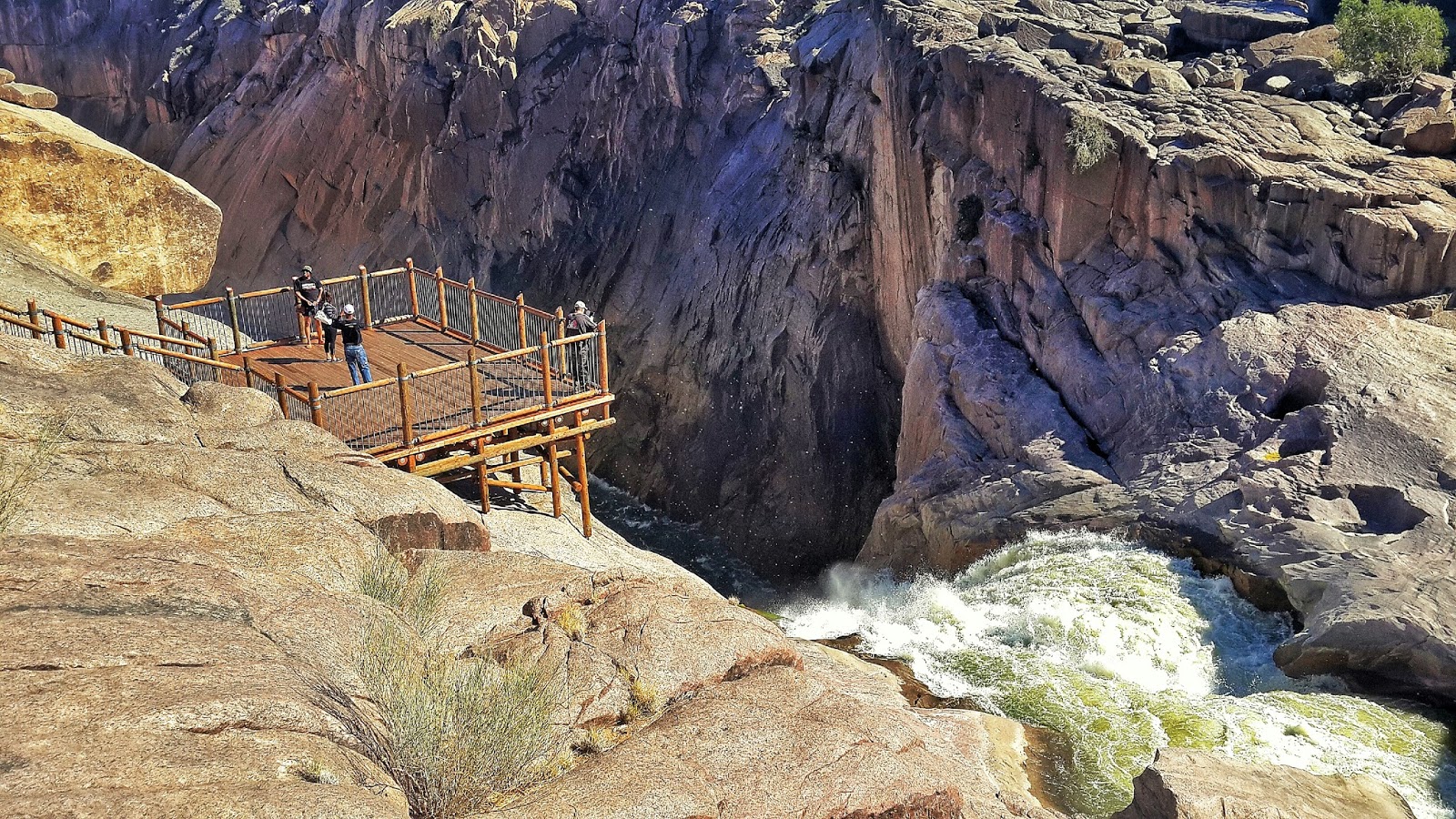 Was it the effect that the ride had on me, or the rural landscape that we were traversing, or was it Oma Miemie’s Farmstall in Kenhardt that made me decide to order the out of the ordinary – a scone and a cream soda float – for lunch? While savouring these flavours from my childhood on an overly decorated café stoep, I pictured people somewhere in the city at that moment rushing out from their offices to get some fast food for lunch. However, the tantalizing ice cream and cream soda taste soon made these thoughts disappear. 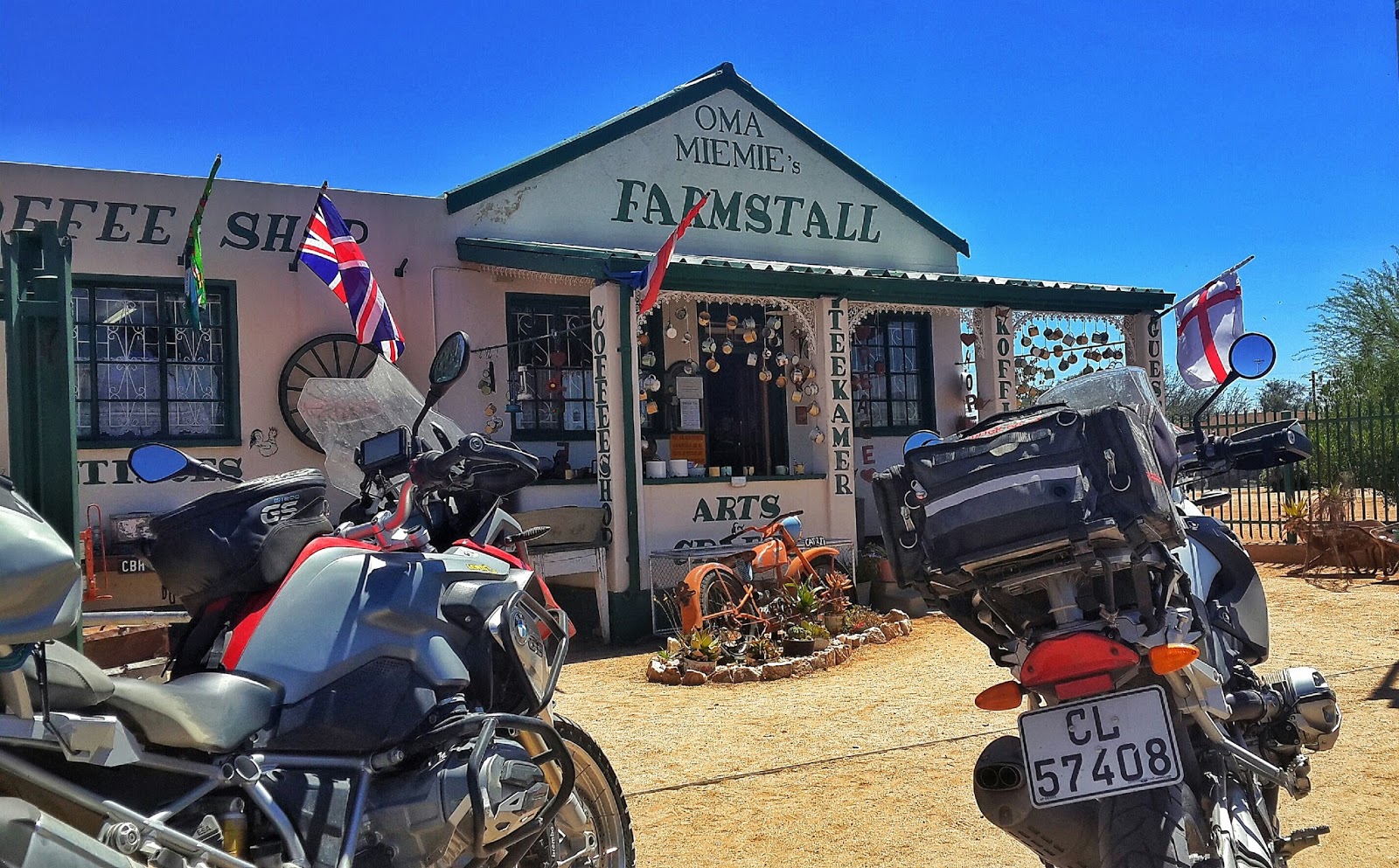 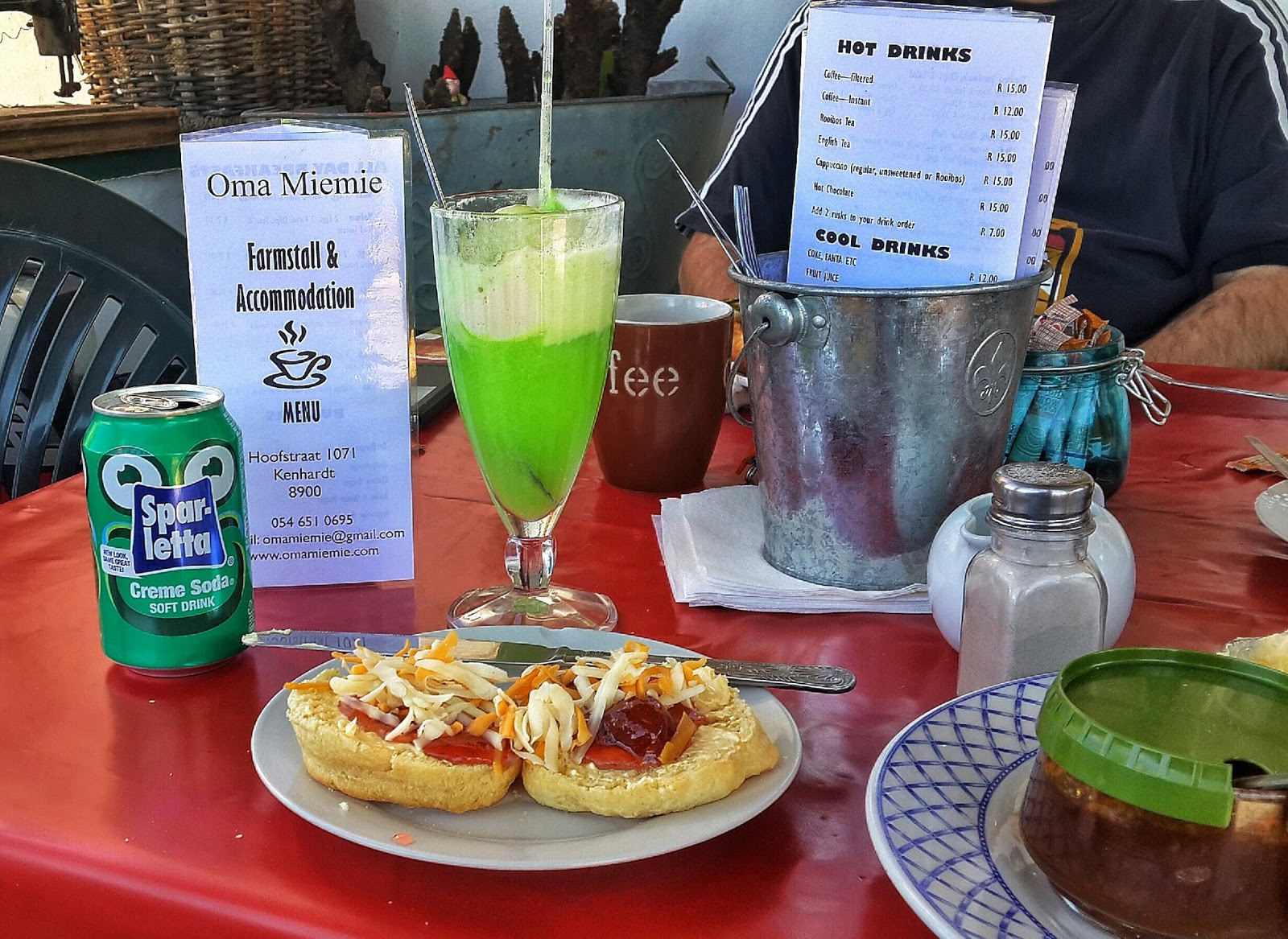 Verneukpan. My fascination with this flat piece of earth 57 km long and 11 km wide started when, as a child, I first learned about Sir Malcolm Campbells’ attempt to set a world speed record on the pan way back in the 1920’s.

Approaching the pan from the north, an ever-present mirage created a mirror effect stretching from left to right as far as the eye could see. The effect constantly moved on ahead of us as we were traversing the pan.

We had the treat of meeting the owner of the land, the enigmatic Giel Lubbe, on the pan where he was preparing his very basic camp site for visitors to arrive later that day. His stories about the land, the people who visit, land speed attempts, film shoots and speculation about the origin of so-called crop circles on the pan were fascinating. 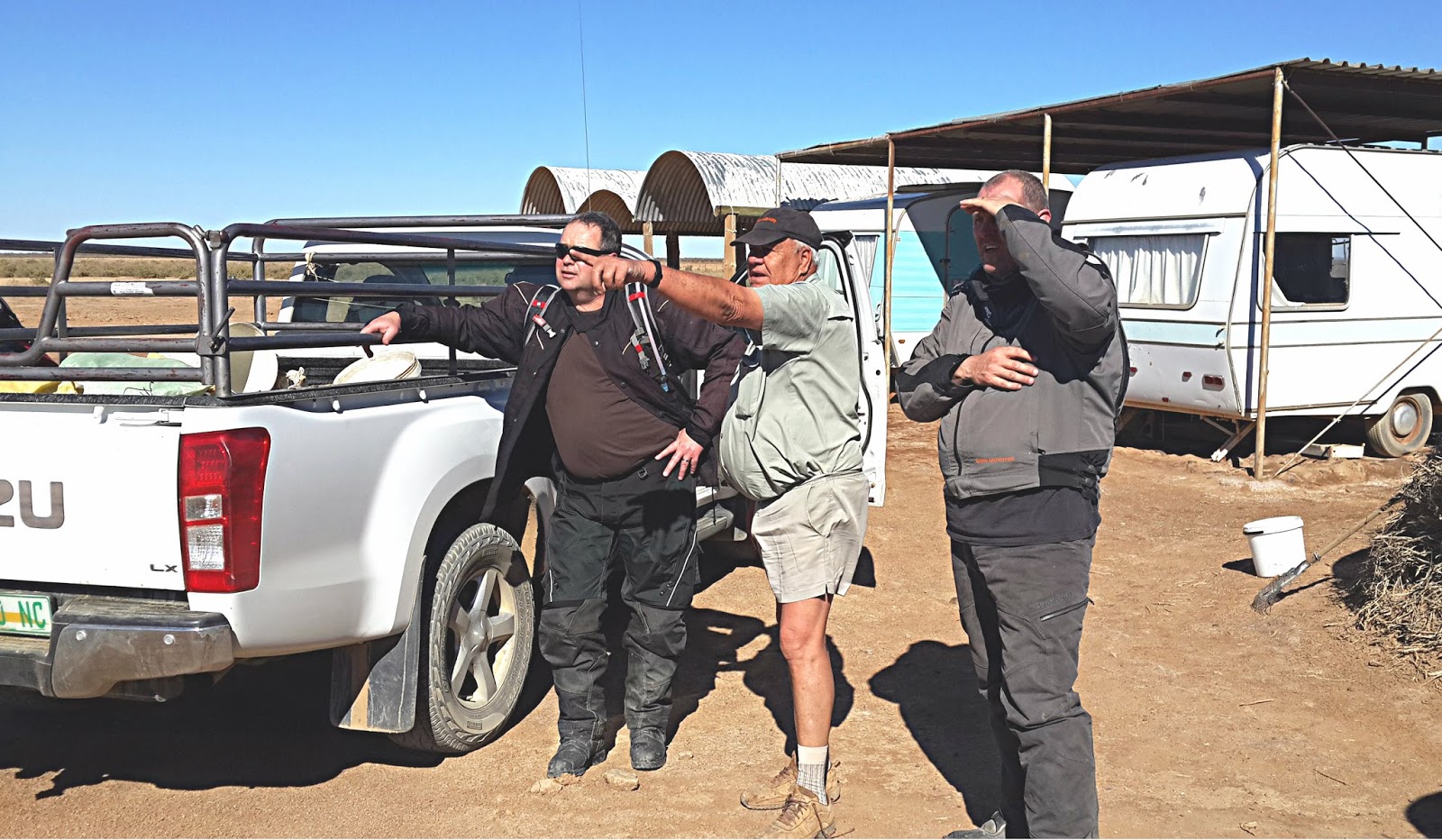 Even more fascinating was the effect that the pan had on my senses. Distant objects on the verge of the pan seemed to be much further away, yet much bigger and out of proportion at the same time. Moving even slightly closer, changed the perspective and made things look real again.

That night we experienced farm style hospitality in abundance on the farm Benoudsfontein near Williston. Enjoying a traditional home cooked supper with our hosts, Danie and Marie van Wyk, we started to understand what influences the lives of the wonderful folk who live in this part of the world. We learned about the effect (most of it not positive) that the Square Kilometer Array (SKA) radio telescope project in their district has on them, we shared their concerns about fracking in the Karoo, we listened in awe as they explained their personal involvement in their annual mega church bazaar and we shared with them the love that they have for the land.

Outside, light from more stars that I’ve ever seen before, rained down on us from a clear Karoo sky.

Going back home the next day took us through vast Karoo landscapes, made us admire the stretched out Tankwa Karoo from the Ganaga Pass 700 m above and had us hanging onto our motorcycles as we negotiated a strong cross wind while travelling south on the Ceres-Calvinia road, also known as the Forgotten Highway.

And as we approached the lush, gentle landscape around Ceres further South, I started to understand why I find it necessary to now and then journey north from Cape Town into the harsh hinterland. This part of the world brings riding adventure of a different kind. It has destinations not to be found elsewhere.

Our three day tour was invigorating and we obtained a new perspective on life while travelling these remote gravel roads. We gained inner peace through the presence of one person when we stopped at a remote missionary station on the banks of the Orange River. We watched with amazement at Augrabies where water from the same river cascaded down into a deep ravine. We felt insignificant, almost lost, while standing in the vastness of a salt pan with seemingly no end. Above all, we were touched by country folk and their love for the land that sustains them and their dedication to God who gives us life.

If we had our passports with us, we could have gone further north and seen much more. We were glad that we didn't. What we've experienced in the Northern Cape was more than what we could have asked for. 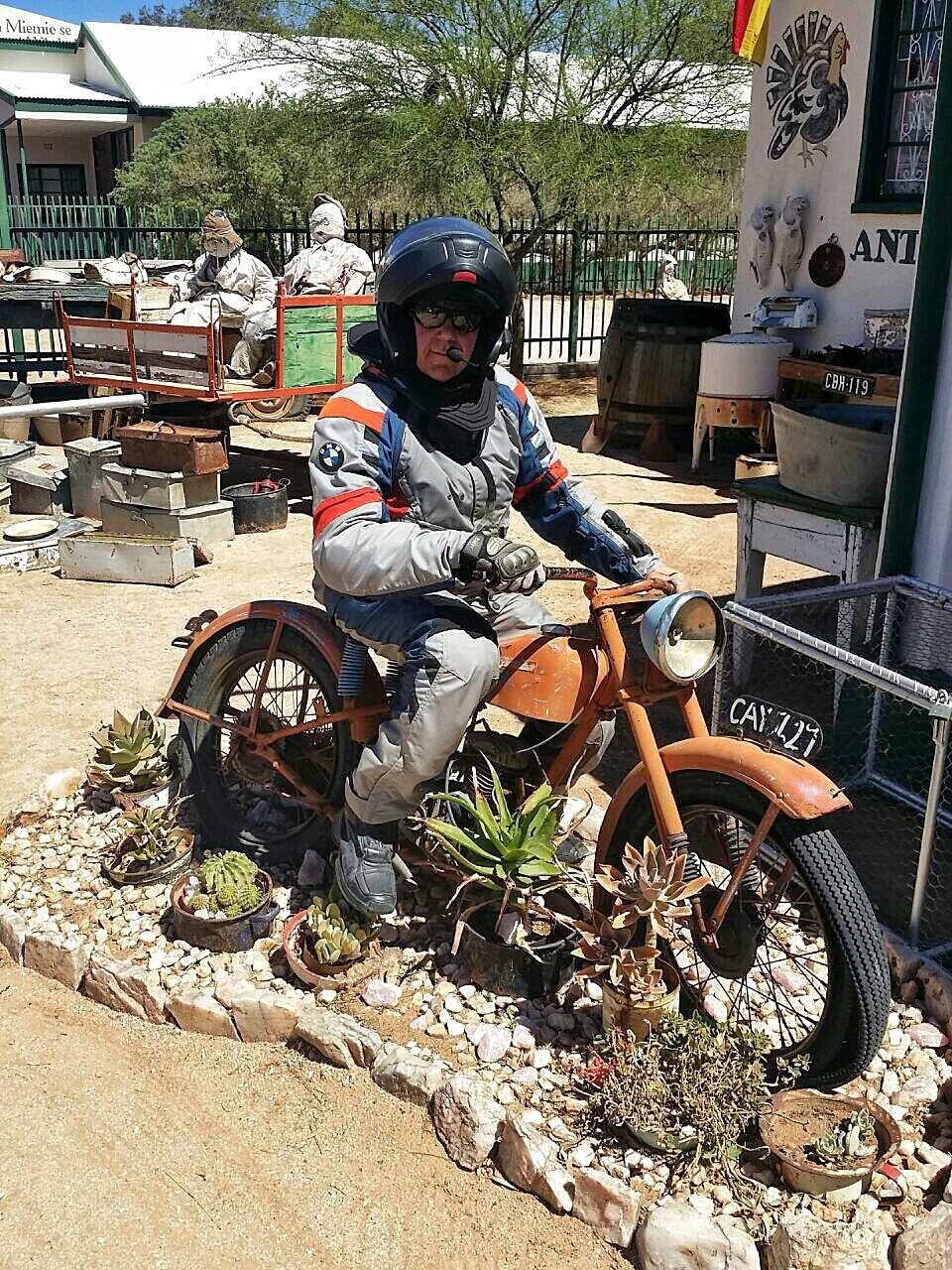